Installed in the 1860s as Port Adelaide's first fixed navigational beacon, and later used at South Neptune Island, the Port Adelaide Lighthouse today functions as an iconic museum display in the heart of the Port.

The lighthouse that stands near the end of Commercial Road has a history to match its status as a landmark of Port Adelaideâ€™s waterfront.

First lit in 1869 near the mouth of the Port River, it replaced a succession of lightships that had operated from the same location since 1840. At the turn of the twentieth century, the Port Adelaide lighthouse was dismantled, and its components separated and used as part of two other beacons.

The lantern, which was erected on a screw pile light at Wonga Shoal, was later lost in an accident. By contrast, the steel tower assembled at South Neptune Island remained in use until 1985, when it was deactivated, disassembled, and moved back to the Port. Following a period of restoration, the lighthouse was erected on its current site in 1986 and is currently managed by the South Australian Maritime Museum.

View this cache on geocaching.com This cache was created by Worst Cache Scenario Learn more Find out more on SA History Hub 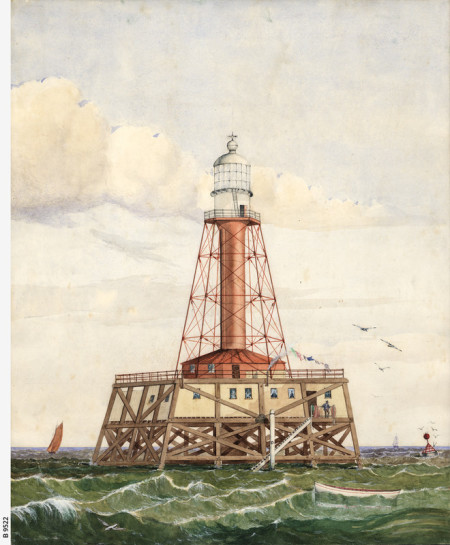 Watercolour painting of the Port Adelaide Lighthouse, 1874. The lighthouse is depicted following its 1874 renovation.

Image courtesy of the State Library of South Australia, SLSA: B 9522, Public Domain