Colonel William Light is the person most associated with the founding of the City of Adelaide. He chose its location and planned its streets, squares and parklands.

Light commanded the brig Rapid for its voyage to the new colony. Reaching Kangaroo Island on 19 August 1836, Light immediately began to search for the most appropriate site for the colonyâ€™s capital. He had been given sole responsibility for choosing its location. On 11 January 1837 he began his survey of the capital. His plan for North Adelaide and South Adelaide (now the central business district) on either side of the River Torrens and surrounded by a belt of parklands, was completed by May of that year.

Light was given the unique honour of burial in the city square bearing his name and granted South Australiaâ€™s first official public funeral. On the day of his funeral, shops were shut and public offices closed by order of Governor George Gawler, who had replaced Hindmarsh in October 1838.

View this cache on geocaching.com This cache was created by McFreddo Learn more Find out more on Adelaidia 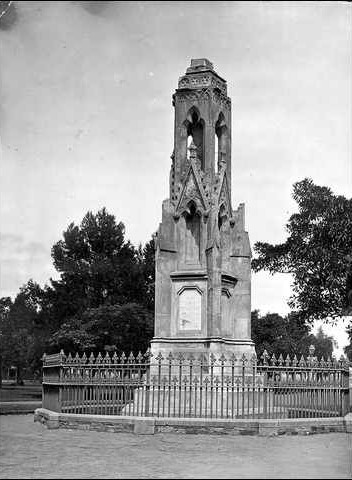 The first memorial to Colonel Light seen here without its spire; a new memorial was erected in 1905 ca.1904
Image courtesy of the State Library of South Australia SLSA: PRG280_1_11_435, Public Domain