The Sturt Street School was designed by architect Edward John Woods in the gothic revival style and a bluestone structure. The original building included separate rooms for girls, boys and infants.

The Sturt Street School was opened in 1883 as a City Model School.

It later became known as a â€˜Practicing Schoolâ€™ in 1930 and a â€˜Demonstration Schoolâ€™ in 1961, because of its purpose in providing practical training to new teachers, particularly those going to work in one-teacher schools in rural South Australia. The schoolâ€™s multicultural student body grew in the 1950s and â€˜60s with the arrival of children from migrant families in the South West.

In 2004, under pressure from locals, the State Government re-opened the school. This proved a popular decision and the school grew again. A number of additions were made to the original buildings.

View this cache on geocaching.com This cache was created by Worst Cache Scenario Learn more Find out more on Adelaidia 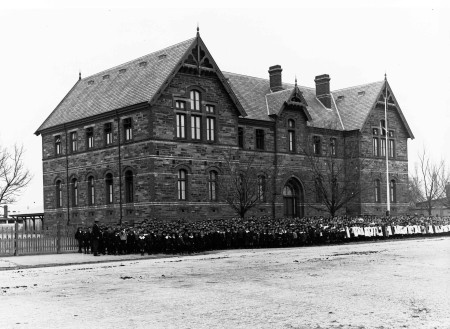