The striking 20 foot tall Arch on Shannon Street is both a landmark and a moving memorial.

The Birdwood Soldiers’ Memorial wasÂ originally built as a monument to those from the Birdwood district who served in the First World War.

Birdwood was renamed during the First World War to remove the German name Blumberg. The foundation stone for the memorial was laidÂ to great fanfare with a speech by Â Gen. Sir William Birdwood, the town’s new namesake, in 1920. The hedge behind the memorial is formed by seven trees planted in the memory of the people from the district who died serving in the First World War.Â The names of those who served in the Second World War were later added to the memorial.

View this cache on geocaching.com This cache was created by Worst Cache Scenario Learn more Find out more on Monument Australia 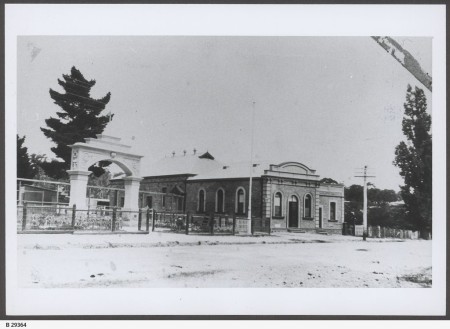 The Soldiers’ Memorial and Institute building in the Main Street of Birdwood, 1920